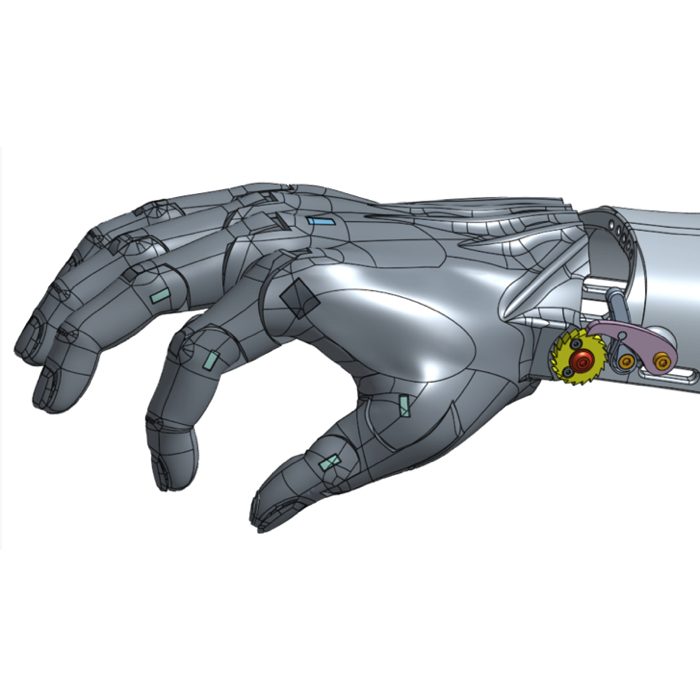 Classically, bending the wrist enables handling objects with an E-nable hand prosthesis (Raptor or Phoenix). But, we identified that this bending movement, necessary to trigger a grip, led to tire the user of the prosthesis with time.

After Nathalie has experimented her hand prosthesis (see post), it became obvious we had to find a solution to relieve her wrist muscles. Nathalie is an adulte who suffers from an amputation of her right hand (after her wrist) after a healthcare-associated infection. Once she contacted E-nable, she was equipped with a first customised prosthesis. However, as she used it regularly – to handle tableware, purse, or to bike – the fatigue of its muscles becomes too important.

It becomes necessary to enable a grip position of the prosthesis without effort from the user of the prosthesis. Additionnaly, this feature has to be as less bulky as possible and easy to use.

Different solutions were considered to maintain the tension in the finger wires in order to lock the grip position. However, no trade-off was found out. As an alternative, we looked for a system locking the hand in the grip position with no effort. Thus, below proof of concept has been used as a guideline, based on a ratchet working principle. 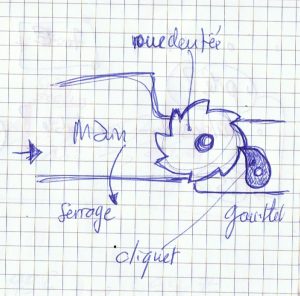 Row idea, based on ratchet working principle, for locking the grip position of a hand prosthesis with no effort from the user.

To approve such a concept, a first prototype has been designed and printed. Palm and gauntlet proxies have been replaced by simplified parts, printed in blue on below pictures. 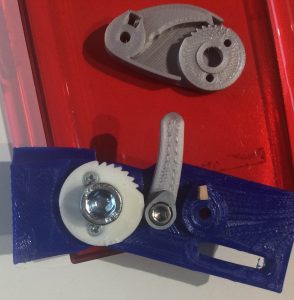 Proof of concept, every parts were printed in PLA

All the design was realized on « OnShape » for all the advantages listed here.

Once the proof of concept approved, a first functional version has been realised:

First version of the « Wrist lock». On the left, in open position. On the right, in close position.

On the material side, we started by printing tooth and ratchet in PLA and iGlidur (IGUS). But strain wear due to the ratchet/tooth contact were too important. So finally, we machined them in metal (aluminum/steel) to limit wear effect and to support efforts generated by an adult (for instance, the screws used to attach the ratchet to the palm quickly get loose because of these efforts. They have been replaced by two nuts-screws). Ratchet was bought at a specialist and tooth was machined in our hackerspace with a CNC DIY. Notice that the « wrist lock system », in its final version could be nevertherless fully 3D printed if the final user is a child since the generated effort would be lower.

First observations after print and assembly

After assembly, the system works well. However, we observed quickly a permanent deformation of the flex spring, mainly in open position. Likewise, the cam, in PLA wears against the metallic tooth.

So we have redesigned these two elements to make the system robust. Purpose was to avoid the wear of the cam while not loosing the elasticity of the spring.

For the second version, a torsion spring has been introduced to solve both previous drawbacks:

Second version of the « Wrist lock system ». On the left hand side, the cam and the flex spring have been replaced by a torsion spring. This spring link the lever to the tooth. It lowers the lever and maintains the contact between the ratchet and the tooth in close position. Likewise, when the lever is in open position, the spring raises the tooth. On the right hand side, the spring has been designed with the helix function of Onshape.

We have first considered the wear issue. This wear comes from the friction between the cam and the small hole in the tooth. This contact is necessary to switch between open and close position. So both features have been deleted, replaced by the torsion spring. It is now a part of the lever and slots into the tooth. Thus, both part are solidly linked. So, tooth can switch between open and close position when the lever is pulled toward the right or toward the left respectively, through spring action.

Then, when the lever is pulled toward the left. Tooth switch in close position. Then, when the wrist bends, torsion spring maintains the contact between the ratchet and the tooth by means of its elasticity. Thus, the lower part of the tooth, from version #1, becomes useless and is deleted.

In this new configuration, the torsion spring does not require to bear high efforts. Indeed, beeing attached under the tooth, it is only used to i-maintain the tooth in open position when the lever is on the right, and ii-maintain the contact between the tooth and the ratchet in close position. Such low efforts limit the risks of wear and failure of the system.

Observations after print and assembly 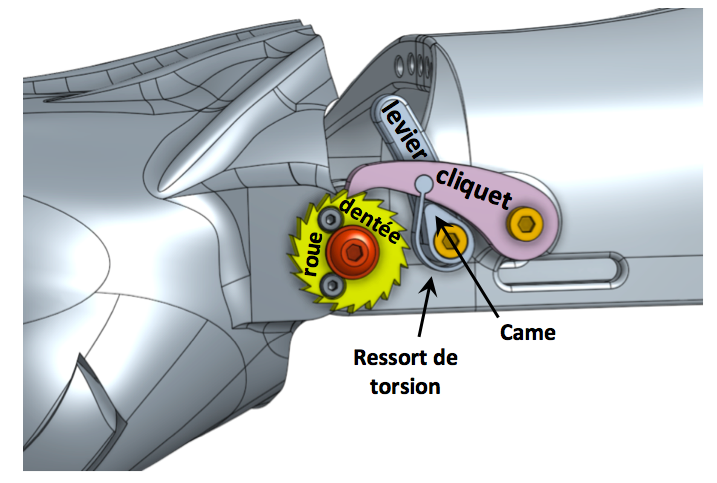 Final verson of the « Wrist lock system ».  The cam lever has been re-introduced but only to help switching from close to open position. The torsion spring then ensures to remain in open position.

After assembly, this version is retained.

Once the final design retained, two finishing touches have been added:

Finishing touch for the final version of the « wrist lock system ». On the left hand side: a protection spacer to avoid any contact with the sharp metallic teeth of the ratchet. On the right hand side, an aesthetic cover.